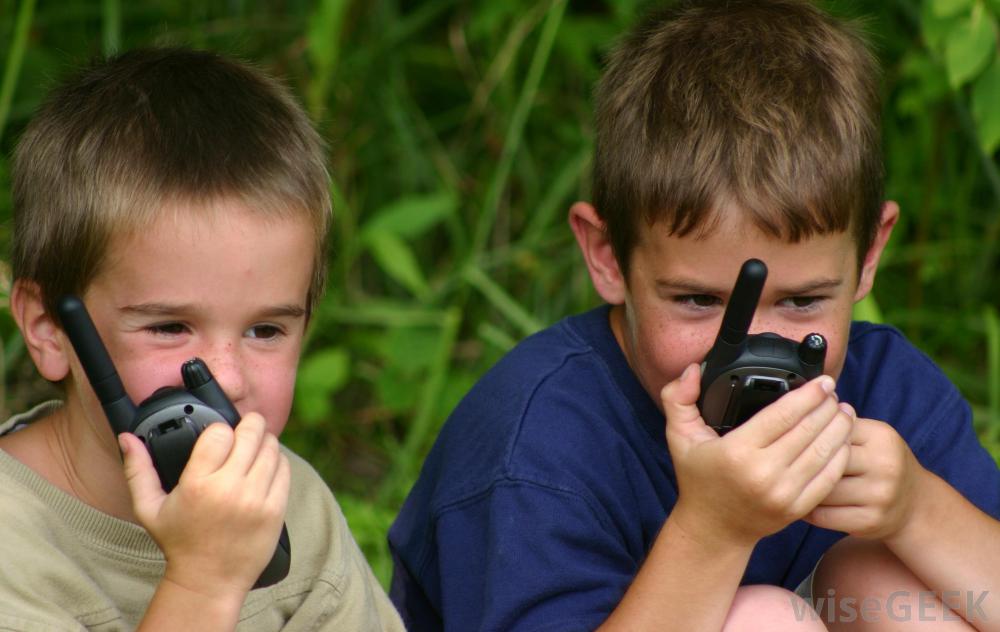 You have probably seen a walkie-talkie before, or at least, you’ve heard them being used on police shows and crime dramas. If you have never played with it, then you’re missing out on all the fun. Walkie talkies were way more popular before smartphones around, but they are still fun to play with and share information over short ranges. It’s like a private conversation that only you and other people on your channel can share. It’s used by law enforcement, military personnel, public event organizers, and even retail shops.

This guide looks at how walkie talkies work as well as what types you might be interested in depending on what you want to do.

So What’s a Walkie Talkie?

First things first, walkie talkies look like a handheld, screen-less device, and work like radios. They can communicate wirelessly between one another on a single, shared channel, also called a frequency band. Each walkie talkie is powered by a battery and contains a transmitter as well as a receiver. The antenna at the top of the units transmits the radio waves between the devices.

The loudspeaker on the front of the device typically also servces as a microphone, and there is a button you can press to talk. When you first turn it on, you probably won’t hear anything but static until you press the push-to-talk button and the other person with the second device replies.

There are fancier walkie talkies than this that have different buttons for scanning channels, and some will have a small screen to indicate the channel that you’re on as well as other information.

How to Use a Walkie Talkie

When you’re using a walkie talkie, you have to be on the same channel as other people. For example, if you’re at work, and one employee in the front as a walkie-talkie and needs to order something up from stock, they’d hit channel 11 to talk to the stocking staff. Once you’re ready to talk, you simply press the push-to-talk button and start speaking into the walkie talkie.

Your voice is transmitted over radio waves and sent to the others on the same channel. These are typically on a frequency of 460 MHz. These waves travel pretty fast, typically at the speed of light, which is around 180,000 miles per second. Basically, your voice instantly transmits over the channel. Many people like to say “over” when they are at the end of their transmission, then release the push-to-talk button so that they can hear what the other person on the channel has to say.

One of the main issues here is that only person can talk at a time with two-way radios. You may have several different channels, but in each one, there can only be one voice speaking at a time. If others try to speak, you won’t be able to until that person releases their push-to-talk button.


Who Invented the Walkie Talkie

Two-way radio sets were originally invented in 1937. These were much more primitive versions of the analog and advanced walkie talkies that you see now. These original radios were created by Canadian Donald Hings. However, American Alfred Gross also invented the two-way radio around the same time. Both of them pitched their radios to the military. The radios became a very popular communication tool in World War II. This led to many other inventions.

Alfred Gross also invented the pager, which was another popular way of staying in touch before cell phones were created in the 1980s and 1990s. Hings also made several contributions to radio, radar magnetic surveying devices, and equipment for measuring air pollution.

Benefits and Disadvantages of Walkie Talkies

For many reasons, walkie talkies are still very prominent in areas where employers or military want their people to communicate effectively in a small space. However, these devices aren’t the best for this as they have several issues. While some manufacturers have tried to stretch battery life and add more features, there are still some things that make walkie talkies less advantageous to use in certain situations.

Understanding the Parts of a Walkie Talkie 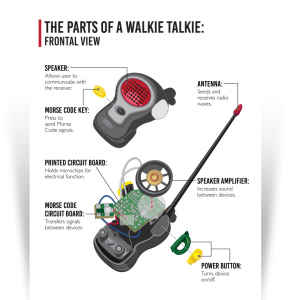 Like all things that use batteries, you have to be careful to charge the walkie talkie. If your employees leave work without putting their headsets on a charger, or one gets left out, you will have to wait at least an hour or two before even being able to use it. Then you’ll have to charge it again after an hour. Walkie talkies typically need to be charged for 3 hours to have a full battery charge.

Every walkie talkie has similar parts, although larger, more advanced units may have different uses and therefore different buttons. We’ll go over the basic parts of typical radio device so you get a sense of their basic functions.

The antenna sticks out from the top of the walkie talkie. These are typically thick, radio transmitting antennas that are protected by a casing. These send and receive radio waves.

Not every walkie talkie has a display, and if they do, it’s just a small square. This display shows the channel selection, remaining battery life, and other things, like how many people are on the channel. This is only the case in some advanced units.

Walkie talkies have multiple functions. If you want to use it as a baby monitor, you can switch it to “listen” or monitoring mode. Now you can place one unit in your house to listen to while you take the other unit with you. Remember that walkie talkies have a short range, but it’s helpful when you’re in a small, enclosed location.

There is typically a menu button with a list of options that are marked by plus and minus symbols. You can use these buttons to navigate the options on the menu through the LCD display.

This is located on the front of the walkie talkie, and it’s what you speak into so that you can transmit your words to the other units on the same channel.

this is a button that is typically located on the side. When pressed, it may make a beeping noise to alert you that you’re active or that someone else is speaking. Once pressed, you can start speaking into the loudspeaker and transmit your information.

These are function buttons located on the side or on the front of the walkie talkie. These turn the unit on and off, as well as control how loud the unit is.

In some cases, you may have a headset attached to the device that is operated a little differently. Instead of speaking into the unit, you’ll control it by talking into the headset. You’ll still need to use push-to-talk.

This is a button you can press when you want someone to clear off a channel to let them know that you want to talk. It’s also a way to annoy your siblings who have a walkie talkie near their beds!

Most people get a set of walkie talkies when they are younger and use them as kids, or you may get them when you have a family but they’re called baby monitors. More advanced walkie talkies have other applications for law enforcement and military. Here are a few ways that they are used today:

How old can you be to use a walkie talkie?

Children can start using walkie talkies pretty young, at the age of 3 or 4, when they begin to speak. Most devices are pretty cheap nowadays. You wouldn’t buy an advanced unit for children, however.

What’s the typical distance that walkie talkies can be used within?

Typically, the range goes up to four miles for an advanced unit but may be as small as one mile for a child’s toy unit. This really depends on indoor and outdoor use. You also want to make sure that there aren’t any obstructions for radio waves in your building before you use a walkie talkie system. A metal framework can lead to interference.