Over the course of decades professionals, going to the longstanding expeditions, are using communications tools, which became dependable helpers in long camping during hard and dangerous ascension. Frequently stable communication is the only chance to survive in an emergency.We made for you our Top-List of wristwatch radios and we hope that the information about them will be useful and will help you to chose one walkie-talkie intended especially for you. 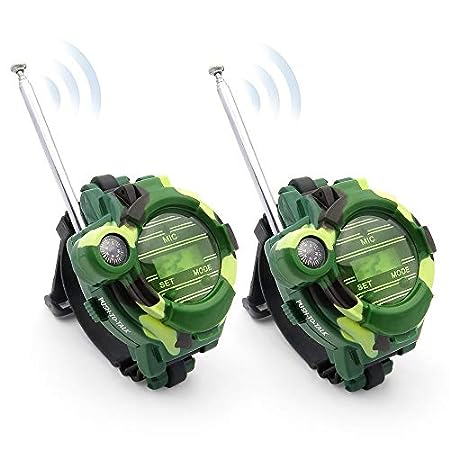 The XHAIZ is a wristwatch and walkie-talking combined. If you have a child and want a quick way for them to get in touch with you when close to your vicinity (but not immediately in your viewpoint), it’s a very useful tool to have around. The digital display provided shows time and will glow in the dark, making it easy to see when there isn’t much light around. It also has a compass, so bring it with you if you’re going into an unfamiliar area and want a quick way to find out where you are. This could also be useful for emergencies.

There’s a small antenna on the side of the watch that can be extended if the signal is too weak to be heard. Storing is even easier; just put it in your pocket or a bag when you or anyone else doesn’t have it at hand. The radio’s volume can be heard but isn’t the type of loud that one would hear on standard radio.

With this in mind, don’t expect it to replace larger walkie-talkies. And the signal tends to disappear when they go out of range after a short distance. You’ll probably have trouble connecting to the other watch in less than a half-mile. But that doesn’t mean that your kids wouldn’t love it. It’s a fun toy and can teach them how to find their location without the reliance on a GPS. And for that matter, that could be something that most adults could teach themselves in the process. 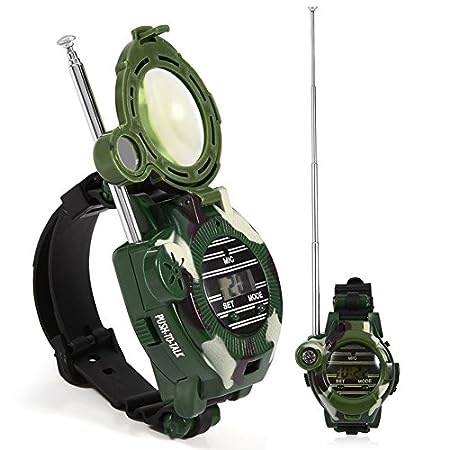 This portable walkie-talkie is intended for outside sport. Loudspeaker mode and voice frequency signal make this device convenient for weekend outings, camping and shopping in the supermarket.

This wristwatch provides you good connection where is no cellular service, so you can stay in touch wherever you go.This one is a great device for wrist purposes. 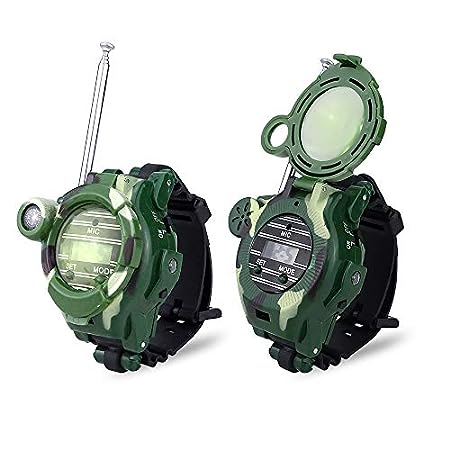 The Inmas Walkie-Talkie is a camo green-colored walkie talkie watching that’s built to last, even while most of it is made of plastic. However, the plastic that it’s built from is pretty dense. If you or your child dropped it, nothing would likely break so long as the height wasn’t so great. It has a flashlight on the side that gets very bright, bright enough to light up a medium-sized dark room. Yet when worn, the weight is an afterthought.

It feels great but not too awkward. Of course, this might take some getting used to when initially put on. The on/off switch for talking with another person (there are two watches included here) is activated with only one button.

Both devices must be on at the same time in order to communicate. Again, the assembly is pretty strong but can still scratch if rubbed against something that’s jagged. For instance, you wouldn’t want to step on it if it were laying on on asphalt. But overall, this is a great way to introduce radio communication to children and a fast route to letting a child know where they if they’re playing in or around the home. The battery will last for a long time and shouldn’t need a replacement for at least a year with normal use. 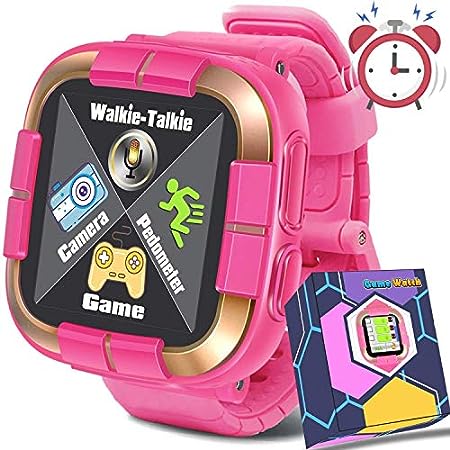 The Kids Smartwatch is sold in colors pink and purple. Telling the time isn’t the only thing that it can do. There are several games featured directly on the watch itself, all of them housed in a small display that’s colored and can be moved with your child’s finger. The instruction manual that’s provided details what must be done to successfully operate it, and goes into detail about controlling other aspects of the device. It even has a pedometer that will monitor foot traffic and health. A timer is also given, along with the ability to communicate with other watches of the same type.

It’s not sold as a pair, so you’ll have to buy a second watch if you do want your child to talk with someone. And they’ll have to be careful not to get it too wet since it’s not waterproof. It does have water-resistance, mind you, but that isn’t the same as being completely unfazed by liquids. Try it out for responsible kids that you know won’t crack the screen or use it in an environment where it could malfunction. The plastic that it’s made from contains no harmful or toxic chemicals, entirely safe to be worn on the skin for a long time. 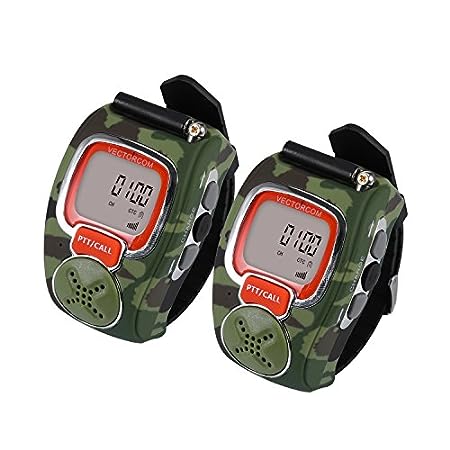 This two-way watch radio provides you high sound quality. Noise blanking function cuts off hum noise for you to get clear sound even in the crowded noisy environment.

Long frequency range from 1 to 2 miles. Not only radio but also a regulated watch with LCD display in real time.

This watch walkie-talkie will be an ideal present for kids from 3 years old. The smart function “push-to-talk” is intended for the smallest. Be in touch with your relatives and friends on events using a built-in transmitter. Practical to carry because of small size and lightweight. 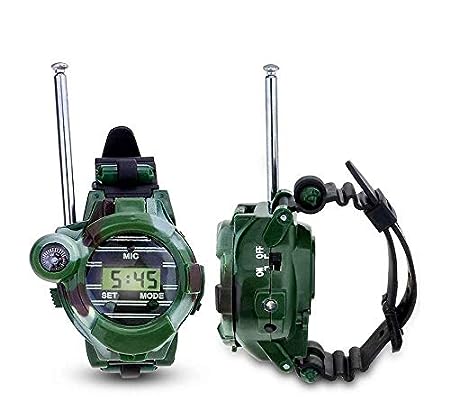 This amazing walkie-talkie wrist radio can be used not only as a radio but also as a direction finder, watch, night-light, secret capsule, magnifier and reflector! That is why it is one of the most salable devices on the market.

Long frequency band and excellent sound quality factor. Hitopin walkie-talkie passed the test and confirmed that it can be used within a radius from 2 to 3 miles easily. Transfers are very clear and channels are stable, so they won’t be switched themselves.

Noise-canceling function turns off the background noise, so you can get a high quality of receive-transmit even in a noisy environment. The automatic scan function finds the clearest channel by itself. You just need to regulate the volume of the sound as you see fit and use it.

Generally meant for children from 6 to 12 years old. 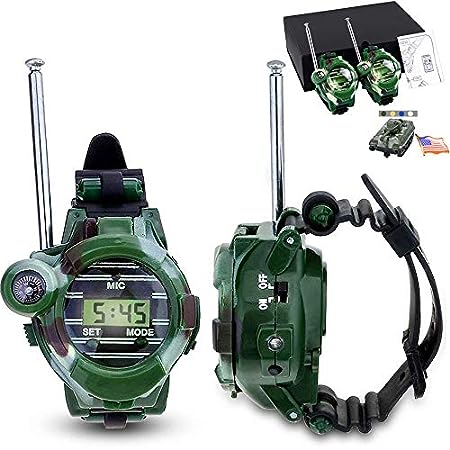 ToyPark walkie-talkie has a very cool design. Kids and parents both love watch radios, that is why these broad-band radios are so popular on the market. They are really comfortable to carry on the open areas. The package comes with headphones with a microphone for loud speak mode.

The walkie-talkie watch sounds clear and loud. The long frequency band attains 3 miles in the open area. The device work goon both in- and outside. The time LCD display with highlighting, Li-on battery and built-in driver.

ToyPark walkie-talkie is a perfect gift for your children if you want to stay in touch with them during riding a bike or just playing in the backyard. It will be useful also at the weekend, for camping or for shopping in the supermarkets.

This is the newest communication device that can easily replace the mobile phone for your children and will keep you in touch with them wherever you go.

It doesn’t make any sense to describe the dividends of using walkie-talkies where is no cellular communication is provided. Whether you are traveling on feet, riding a bike or driving a car, participating in summit ascent, off-piste skiing or you prefer to spend your time with friends by hunting or fishing, with walkie-talkies you will always be in touch with your group. Moreover, using radios instead of mobile phones is a more economical and convenient mode of communication.


In a camping trip within the carrier’s network coverage, the convenience of using walkie-talkie is indubitable too, especially when you are in a reconnaissance of new safe lane or for car parking space. If it’s not a one-person, then another could see something passing by and call the partner. Also, you can be heard by all group teammates. So, if you are the lover of outside activities, a walkie-talkie will become the best friend for you every weekend.

Walkie-talkies are intended for a voice transmission between their owners. In such a way you can talk with your family and friends over a 1000 meters distance absolutely free.

Wrist walkie-talkies are made in the style of a wristwatch and are under the radar. A strap is made to be ideally attached to the arm so the radio won’t fall even in hot weather. Portable wrist walkie-talkies are understandable and handy. They are coupled with the wired fitting with external microphones and headphones for you to talk without problems. There is a built-in driver for communications, which lets not only you but also other people to hear the conversation as well.

There is also a connector for garniture if you want to keep your conversation with a teammate in a secret; moreover, it helps to get rid of background noise. These radios have several transmit/receive channels, highlighting the digital LCD-display and powerful Li-on battery. The signal goes over a distance up to 10km. To use the radio in the dark there is a light-emitting-diode, which helps you to see all the needed information just at the screen. The package of this walkie-talkie can be very useful during a hunt (to be in touch), fishing (to keep up a conversation), forest and mountain camping (for general talk over a distance), on a building work (for quick transmission of instructions for workers).